Before I left for France, a good friend told me that she couldn’t wait to hear about everything that I discovered. She said she was especially excited to hear about the places and experiences that became my favorites, as I got to know Paris and its people. In honor of her request, and in no particular order, I thought I’d share a few of those favorites here. This is obviously not a complete list, and with a few days to go still in this City of Light, there may be changes. For now…

1. Favorite wine bar: Le Baron Rouge, in the 12th, where it is all too easy to not only fill empty wine bottles from the barrels along one wall, but also, surrounded by locals, to drain them.

2. Favorite morning café: I am endeared to the proprietor of Le Goncourt, who remembers that I order a café crème, and who is sweet enough to deliver my order with a flourish and an enthusiastic, “Voilà!” I’ve never heard that from any other person in France, and maybe she’s doing it just because I’m American, but I kind of love her for it. 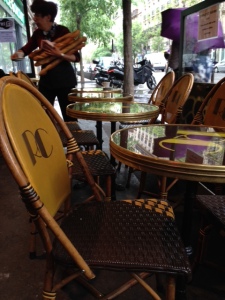 Running back to work with more baguettes!

3. Favorite park: Le Parc des Buttes Chaumont, which I visit every day, is filled with people all the time, running and napping and embracing and practicing tai chi. There are a few cafés, a lake, a puppet theatre, waterfalls, bridges, and sculptures. It’s gorgeous.

A rainy morning at the park, where I have learned that French runners wear scarves. (Really.)

4. Favorite Métro stop, interior: Concorde, where the tiles spell out the Déclaration des Droits de l’Homme et du Citoyen (the Declaration of the Rights of Man and of the Citizen). The station also apparently inspired an Ezra Pound poem.

How many words can you find? Remember, they’re in French.

5. Favorite Métro stop, exterior: The entrance to Palais Royal – Musée du Louvre is marked by arching, colored glass beads, representing day and night. I sat under a café awning across the street one evening and watched as tourist after tourist approached the servers to ask for directions to this Métro stop. It was amusing because it’s so hard to miss, and because the servers had a little fun at the tourists’ expense before pointing them in the correct direction.

Makes me think of a circus.

6. Favorite dead pigs: Ok, I never actually got a picture of my favorites – who were skinned and suspended in the front windows of a boucherie on my street – before they disappeared around Easter. These guys, though, come in a close second. A friend from California and I watched this man unload dozens of these whole, roasted pigs, carrying them from his van to his shop in individual crates. He spoke no English and little French, and eventually drew us a map directing us to his Siberian church around the corner. We looked, but unfortunately never found it.

Who wouldn’t be this happy with so many roasted pigs?

7. Favorite American advertisement: Ha! Have Majesty Super Balls made their way to a Pizza Hut near you?

This is just embarrassing.

8. Favorite rainbow: Unexpectedly, Paris reminds me of Hawaii in that rainbows often pop up after showers in the afternoon. They make an already beautiful city even more so.

Rainbows always seem like a miracle to me. (Stop laughing!)

9. Favorite dessert: Tarte à la banane, served at a neighborhood restaurant one evening when the power went out in the middle of the meal. Everyone in the restaurant uttered “Ahhh!” in unison before returning, unfazed and by candlelight, to their menus and their meals. The tarte – firm, not too sweet, flaky – was followed by the restaurant’s homemade cassis digestif, and capped off a classic Parisian dining experience.

Lights were back on in time to enjoy this memorable treat.

10. Favorite lunch spot: Le Rubis, near the Louvre, has a limited and classic food menu, an extensive and affordable wine list, and a dumbwaiter that magically delivers lunch from unseen upstairs quarters. 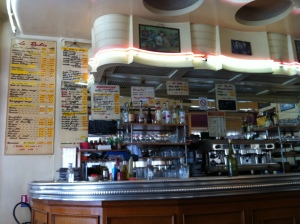 Next time I’ll try to get a picture of the dumbwaiter in action.

Plus, after seeking this out for years on various trips to Paris, it finally gave me my first experience with a Turkish toilet! I think you can figure this one out for yourself. 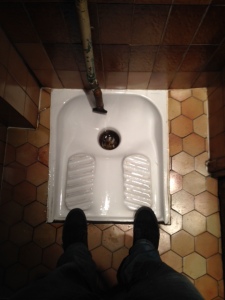 Not my feet – but you get the idea.

There is so much more that I could say about what I love in this city, and if you know of places or experiences that I should not miss, please let me know. I leave Saturday, and will be working hard until then to make the most of every moment here.