I am having a hard time wrapping my mind around Iceland, and what I thought of it. It’s a strange place, and it’s beautiful, and it’s very, very different from other places I’ve visited. I would love to return, but only if I had carefully planned out all of the things I wanted to do, and only if I spent all of my time outside, and only if I stocked up on alcohol in the duty-free wonderland at the airport.

Iceland intrigues me. The landscape – lava deserts! – is sparse, otherworldly, sometimes green, and strikingly desolate. Volcanoes are everywhere, and Iceland is a rare place where you can see the meeting point of tectonic plates, which are almost always in the ocean. It’s possible to stand at the meeting point of the Eurasian plate and the North American plate, which is really pretty cool. I’ve heard that Iceland is one of the ultimate playgrounds for geologists, and even though I’m definitely not a scientist, it’s easy to see why. 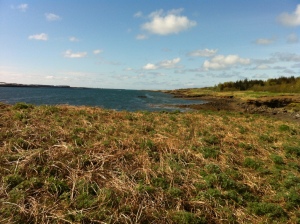 Unfortunately, I don’t think I got any good pictures of the lava fields, so here’s a pretty picture of the ocean instead.

There is impressive beauty in Iceland, from the geysers to the coastline, and I would have liked to explore the land itself in much more detail. Disappointingly, my time in the country was cut to just two full days because of a pilots’ strike, instead of the five I’d planned, which meant that I was not able to get out and about as much as I would have liked. If I returned, I would definitely rent a car; though there are many bus companies willing to cart tourists around, it is a limited mode of travel, to say the least. It is a privileged position to say that I have seen places that are just as beautiful; I found myself thinking of many places that I’ve visited, especially Yosemite, Yellowstone, and Niagara Falls. 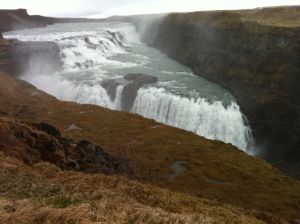 Gullfoss, referred to as Iceland’s most famous waterfall.

One of my favorite things I’ve ever experienced on a previous trip is the midnight sun, in Alaska, several years ago when I had the good fortune to visit right at the summer solstice. There is something in Alaska that has repeatedly called to me, and I’d like very much to return, especially in summer. Iceland, of course, has its own midnight sun, and is fast on its way to this year’s period of never-dark. I had a hard time getting into bed each night, because I just wanted to keep running outside to see if it was still light. It always was; I never saw the skies darken completely. It is marvelous. 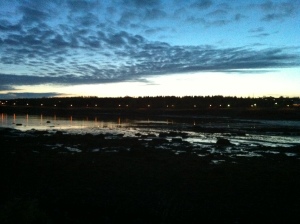 I thought, throughout my time in Iceland, that it seems like a place that is either struggling to find its personality, or is reticent to share it. The people are quiet, polite but reserved; this was a shock, coming from Scotland. I saw some people biking and walking, but not that many, and I heard very few of them, as they rarely were in conversation with each other. One exception was a boisterous group of teenagers, standing at the edge of the ocean in swimsuits, egging each other on and occasionally jumping in, even though the air temperature was about 46 degrees Fahrenheit (8 degrees Celsius). Mainly, though, it was eerily quiet. 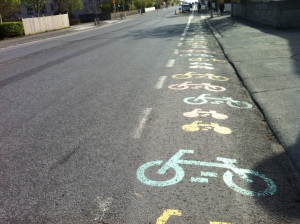 Pretty bike lanes. Notice the lack of people on bikes. Or on foot. Or in cars. Where are they? 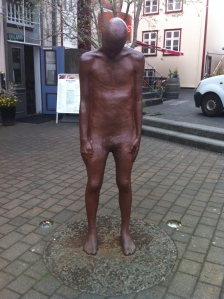 Along with that, I had the constant sense that Iceland is not quite sure what to do with its tourists, the business of whom – I was told – makes up 30% of the economy. There aren’t maps or signs readily available, and everything is so expensive that I had to remind myself that I was not being uniquely targeted as a tourist. I know the truth is more complicated than that; Iceland’s economy is not in good shape, and the country is constantly considering whether or not to join the EU (which, for now, they’ve again postponed). In the meantime, they still use the kroner, which feels like play money until it becomes painfully clear just how much everything costs. 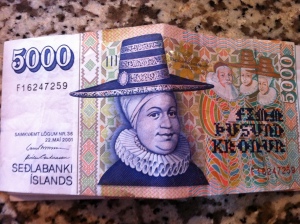 It was kind of hard to take this currency seriously. I mean, look at that ruffle. And maybe she needs a bigger hat?

As an aside: I’m not much for souvenirs, but the t-shirts in Iceland were strange, and contributed to the feeling that perhaps the country is a little uncomfortable with its role in welcoming outsiders. 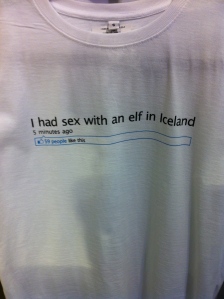 Is this really how you want to be known, Iceland? 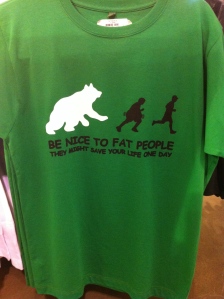 Oh, that’s better. If you want tourists to spend $40 on at-shirt, insult them instead. Wait, what’s that? There are no bears in Iceland, except for those that occasionally float over from Greenland? Then: WTF?

There is a lot more to say about Iceland, of course, and I’m thinking that there may be another post or two coming up. For now, I am glad that I visited, and am not sure how hard I will try to go back. There are so many places to see in the world. If I do return, I will find my own way out into the hard-to-reach places, exploring glaciers and wonders. 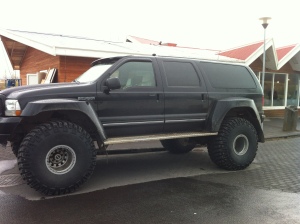 Getting me one of these next time. Rarrr!

In the meantime, I’ll take with me a fondness for the Skyr and the seafood, for the hammocks in parks and the midnight sun, for the amazing public pools and the accompanying saunas, where locals congregate in a ritual that reverberates with health. Next time, if there is one, I hope to go deeper with Iceland, and figure it out a little bit more. For now, with its elves and its trolls, it remains a mystery, and for a land of lava and silence, somehow that seems exactly right. 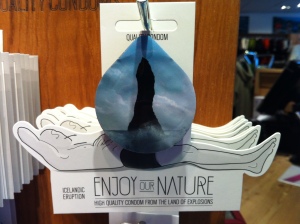 Obligatory funny-condom photo – which, I guess, could be one way of going deeper with Iceland. Ha! I don’t trust this at all, even at 1,200 ISK; that guy is just too chill for my liking.