One of my favorite places on the planet is a farm in Northern California, where I moved when I was in my early 20s to work for a summer. It so caught my attention that I stayed there much longer, and it has been a part of my life ever since. I’ve had the good fortune to spend the last several days here, and – as always – feel like this land has given me more than I could ever return.

Hopefully, the non-farm animals are all literate.

I’ve worked on a few farms, but this one – which also operates as a rustic yet refined guest ranch – is the one that has captured my heart. Though the parcel of land is huge, the farming operation itself is fairly small. Much of the produce comes from a generous garden, and the chicken and eggs are homegrown as well, though beef and salmon come from other local providers.

Thanks be to chickens!

All the regular farm animals – goats, chickens, cows, donkeys – are here, though in small numbers, joined by the more unconventional presence of llamas and ostrich. The llamas were apparently a gift from someone in town, and they stay in the pasture, for apparently they commonly carry lice so stubborn that it is nearly impossible to rid them of it. The ostrich live close to the farmhouse, with no distinct purpose except amusement, occasional giant eggs, and sudden dances in which they puff out their wings and spin around in circles, as if directed explicitly do so from some invisible presence. 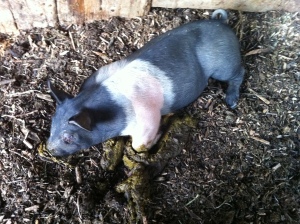 Happy as a pig in…oh. How cozy.

One of the things I love about the farm, which is true for every farm where I’ve worked, is that there is always something to do. Hours pass quickly in the midst of cleaning, weeding, harvesting, organizing, building. There are a million tasks waiting to be tackled at any given moment, some of which are expected and some of which appear out of nowhere. My first night on this trip was exactly like that; I picked raspberries and did dishes, but I also chased a deer out of the garden and chased a cow and two nursing calves through a few pastures, hollering and swatting at them as if I knew what I was doing. 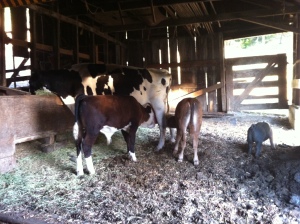 The cow looked udderly (ha!) exhausted by the calves, who I failed to detach before she ate.

The joy inherent in doing all of this is real, and satisfying. It feels like what I’m doing matters in a distinct way I haven’t found with other tasks. I know that my contribution helps build a community, even though I am not a critical piece of this farm. I’m still happy to know that I helped shape bagels and pizza dough, that I organized the store full of farm-made jam and logo-imprinted shirts, that I created marketing materials for programs they will run later in the year. When I am on the farm, I lose track of myself in the very best of ways, forgetting to look in the mirror, letting go of any plans I thought I might want to make for myself.

One of several trays of bagels, which I enjoyed twirling, in dough form, around my fingers.

This is a quirky place in countless ways, and it is unlike any other place I’ve visited. For me, though, it is the place, more than any other I know, that reminds me to get my hands dirty and do what I can, as well as I can. At night – as the daylight disappears; when the garden loses its color and I can no longer decipher the sweet peas or blueberries; when the jerking sounds of unseen animals emerge in the absence of light; in a sweatshirt, jeans, and Chacos, with my hair down and my headlamp by my side – I feel exposed, safe, and purposeful.

I tried to get a picture of the stars, for those of you who can’t see them right now; can you find one?

And in the morning, by choice, I get up early, eager to help in any way that I can, grateful for the chance to contribute something of myself to a place I adore.

It’s always fun in the morning to choose a mug from this wall; which one would you choose?

6 comments on “From the farm”