…where the buffalo roam…

The pilot has just announced that we have reached our cruising altitude; it’s ok to unbuckle our seat belts, use the lavatory, wander about. A flight attendant walks by with a box full of snacks, all individually packaged. I don’t know why he is so well-dressed, in a finely-tailored suit as opposed to an awkwardly-fitting uniform. It makes me wonder what it was like to board a plane when the trip itself was an occasion all on its own.

I’ll never know. It’s 2015, when air travel is anything but glamorous, and I am flying from Maryland to California. 30 minutes into our journey, I don’t know where we are. I don’t know whoever is below us right now, hidden beneath the clouds that separate us.

Flying is a strange thing, an intimate and brief connection with people who I will, in all likelihood, never see again.

I fell asleep as soon as we were airborne, and when I awoke, my longing to still be in Maryland was so strong that I almost cried. My reason for visiting was the best one I’ve ever had: nearly a month ago, I became an aunt for the first time. Over the last several days, I’ve spent as much time as possible with my nephew, trying to be helpful to his parents, and trying to somehow imprint myself on him so that I will not be a stranger the next time I am home.

My love for this small, soft hand might border on obsession; I am all right with that.

Ah, and there it is, that tricky syllable that has caused me so much trouble over the years: home. A few days ago, a friend in California texted. “When are you coming home?” she asked, and I felt a surge of gratitude that I’d been missed. But: home? With my family and closest friends on one side of the country, and my fiancé, new friends, and job on the other, I’m not sure what I picture when someone utters that small, powerful word.

I’ve written about this before, months ago (it’s perhaps my most frequent tag; here’s one relevant, previous post: https://wanderingintrovert.com/2014/05/19/when-the-time-is-right/), and it’s something that still crosses my mind. I have struggled to define what home is, consciously working over the years to make sense of what matters most to me in an effort to find that elusive place. When I first lived in California, I was in my early 20s, and I had no intention of staying. Yet I did exactly that, for many reasons, not least of which was work that made me feel meaningful, and land that awakened something in my spirit.

A few years later, when the pull to the east coast became too strong to resist, I moved back. During the time that I lived there, though, bouncing from North Carolina to DC and then Baltimore, I still felt the call of the west. On some level, I was suspended between the two coasts, and resigned myself to feeling slightly unsettled, no matter where I tucked myself in at night.

Thunderclouds on a fine Maryland day can be hard to resist.

And then, last spring, I decided to return to the Pacific Ocean. I did so with a heart that was both broken and full, finally guided by the understanding that home was inside of me. It was always there, but it resided in a lonely place that I had been afraid to see. To know that I carried all that I loved within me – about not only both coasts, but also about everywhere beyond and in between – was transformational.

Even so, there will never be a time, I don’t think, where I am not conscious of the life existing without me in one of these places that holds my heart. When I awoke a few minutes ago, I longed to feel my perfect nephew in my arms and the mid-Atlantic warmth on my skin. Yet here I am instead, heading west, because I also know that it is time to get back to the life that I have built over the last eight months, to the (other) land that I adore. 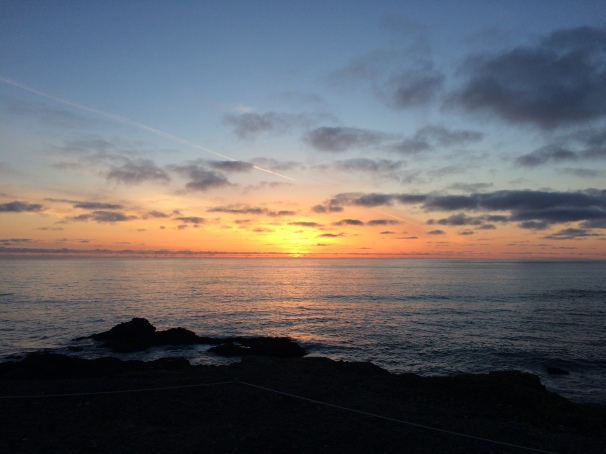 Of course, it can be equally difficult to resist the sunsets of the west coast.

At the end of the day, wherever I hang my proverbial hat, I know I am lucky; missing a life, even as I deeply enjoy my days in the other of the moment, means that I have known – and continue to know – great joy. It would be lovely if my two places were a bit closer; that new little boy in my life is going to be hard to miss. But the fact that I have the option of moving between these coasts is a privilege; I remember that.

The pilot comes on again; we’ve hit turbulence, and the seat belt sign is illuminated once more. The well-dressed flight attendant passes by on his way to the front of the plane. And suddenly, any decision about place is taken out of my hands: for the moment, I’ll stay put, right where I am. Miles above the earth, eternally grateful for these days with my nephew, I have a sense of being everywhere and nowhere all at once.

I settle in, an uneaten bag of chips by my side. I know I will head east again, and soon, leaving home so that I can return home, all over again.

Sure to carry a bit of California with me wherever I go, the least I can do is make sure that my nephew has some, too.

4 comments on “…where the buffalo roam…”