Several years ago, my brother and I took a roadtrip from San Jose, CA to Portland, OR. Out of all the car trips I’ve taken in my life, it certainly wasn’t the longest, but I remember it fondly: making up funny voices to entertain ourselves; a jaw-dropping rainbow just over the Oregon border that had inspired many travelers – including us – to pull over; laughing to the point of silence at something a barista at a drive-thru coffee spot said.

I also remember the chandelier trees. Before that trip, I’d never heard of them, but once I’d seen them, I was completely taken. Chandelier trees are simply coastal redwoods with a twist, perhaps even more incredible than those tallest of trees themselves. They are so named because of the branches that shoot out from the trunk, and then work upwards, so that every now and again, there seems to be a new tree growing parallel to the original one. They’re all the same tree, of course, but the effect is, somehow, dazzling.

Since moving to the coast, I’ve frequently thought about these amazing trees. I’ve asked about them, but gotten no firm response. Though I remember that my brother and I saw an entire grove of them, no one seems to know exactly where that could be.

This weekend, I managed to find exactly one, tucked into the Richardson Grove State Park, in southern Humboldt County. Driving into the park, I swore that it was the spot where my brother and I had found so many, but whether that’s a trick of memory or if I was simply in the wrong park, I’m not sure. In any case, though, the single tree was worth it. 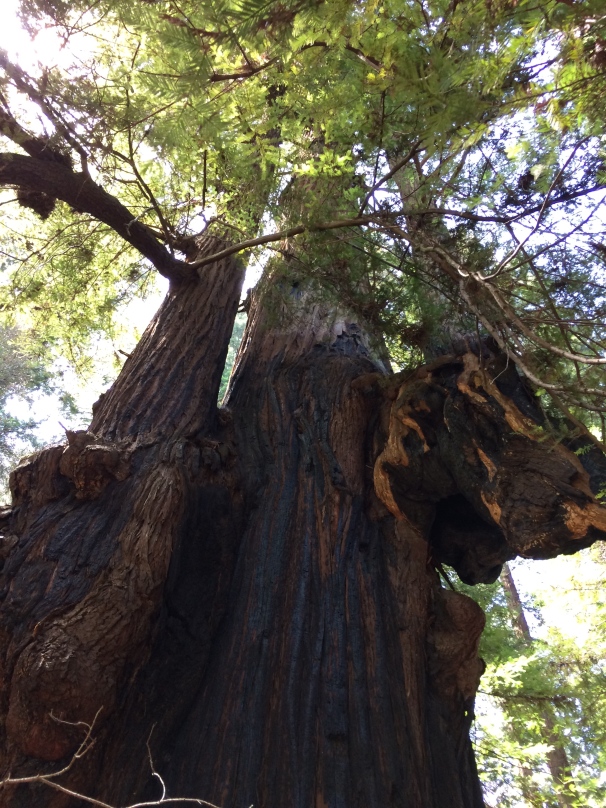 No photo that I can take would do the redwoods justice.

I continued looking, throughout the park and beyond. I couldn’t find others, though I know they’re out there. The day, instead, turned into a reminder of how incredible the redwoods are. Majestic and wise, they put me in my existential place with a reminder of the fleeting truth of life. My existence is just a blip to these sentries of the earth.

But we do try to make ourselves immortal…

I struggle to find the words to describe these trees. Even saying the word “trees” isn’t enough; though that’s what they are, it feels like they are something more grand, along the lines of a long-held myth that suddenly appears before me.

Let’s be honest: Mr. Steinbeck’s words are probably the most helpful here.

In any case, walking through the redwoods always feels, to me, like a glimpse of peace. There is a dense silence, reminiscent of a heavy snowfall, which simultaneously invigorates and dulls my senses. I have a sense that there are stories within these trees.

Stories not only while they stand, but also when they fall, crushing their already-downed brethren.

I can’t imagine what those stories are, of course; I can imagine sitting among the trees, and trying to hear them.

Standing in the middle of a burned-out section of one redwood, staring out at another.

I’ll keep looking for the chandelier trees. I don’t mind if it takes a while to find them, or if I never do. It is blessing enough to walk through these incredible forests.

Redwoods, redwoods, as far as I can see! (There’s the tree in which I was just standing.)