So it probably isn’t likely that the best thing that will happen in this decade, still in its infancy, decided to arrive on its third day of existence. Yet then as I remember last night, when I took a bath under the stars, steam from the water rising about me as I listened to the ocean and the world, and I can’t think of anything better.

I hurriedly made a playlist in preparation, and as the claw-footed tub filled with water, Van Morrison and Vance Joy crooned against the solitude of the night. Yet once the bathtub, swans on its porcelain, was full to the brim – full to the point of water splashing over the side whenever I moved, which was often enough at first and then not at all – I turned off the music and just listened.

I heard:
the waves, which I couldn’t see; and
drops of wayward water falling from the faucet; and
the rustle of the cypress trees dancing with the occasional wind.

I saw:
the constellations, whose names I wish I knew; and
a cloud, drifting smugly by to cover everything for a moment; and
the glow of the half-moon, lurking somewhere I couldn’t see.

I thought:
of true contentment found in water; and
of communion with the world because this is where I was meant to be; and
of
nothing.

The water cooled eventually, as water does, and I found my towel. I dried off haphazardly, picked up the candle, and blew out the flame. One foot in front of the other, I walked across the wooden planks of the deck, slid the door open and stepped into the cabin.

Perhaps there is magic still out there, the earth whispered in my ear.

Maybe – maybe, maybe, maybe – this is just the beginning. Not even midnight, not even the fourth day of the year, and I’d found my way to a bathtub in the woods. Who knows what might be waiting for us? Stars and steam and cypress trees.

(The half-moon lurking in the background, smiling along to things we cannot imagine.) 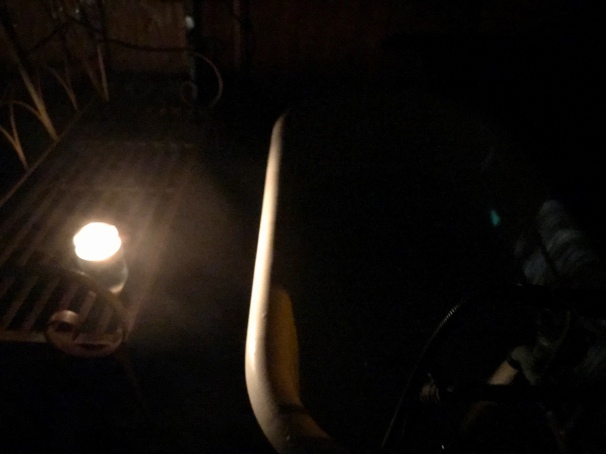