I’m sitting in a coffee shop in Durham, North Carolina, where I spontaneously drove yesterday after spending the weekend with a dear friend at her home near Detroit. The drive, at 12 hours, was too long for me after not sleeping well the previous night, and I had plenty of time to think, listen to music, and think some more.

Today, North Carolina smells like the wide, white blossoms of magnolia trees, and today the air is humid, thick with the promise of thunderstorms. 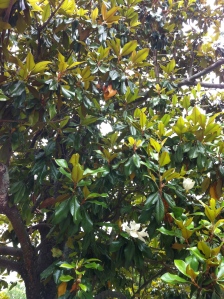 Hard to tell the blooms from the sky peeking through the leaves.

I’ve been sitting here for about an hour, trying to write a thoughtful, interesting summary on my time in Detroit. I am fascinated by the city, and wish that I could understand it. It is a haunting place. I’ve made the mistake of occasionally comparing it to Baltimore, which has more than its share of empty rowhouses and forgotten people, but that isn’t really an accurate comparison. The pain of Baltimore is real, yet the ache of Detroit is everywhere. 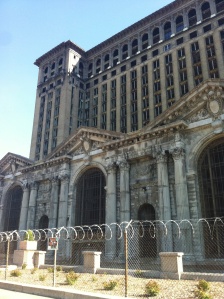 When the Michigan Central Station was completed in 1913, it was the tallest rail station in the world.

There are other sides of Detroit, though, just like there are other sides of every place. Brunch at a Zen center serving family-style meals and selling spices in bulk was evidence of that; so was a coffee shop with vegan items on the menu, local beers on tap, and plenty of seating for hipsters and their Macs. 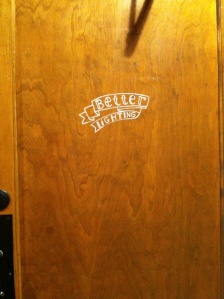 The other bathroom door said “Better Flush” – does it say something about you if you choose that one?

We went to a baseball game and a park; to a bar where everything from mint juleps to kangaroo sliders cost $3; to a farmers’ market that dates back to 1841. I bought antique postcards to send to no one, though I wrote them out quickly in my mind. 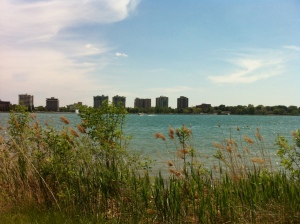 I admired a man painting a Miro-esque mural and I coveted a row of old bicycles that made me want to actually be one of the aforementioned Michigan hipsters, riding back to the coffee shop for a beer and pretending to be carefree. 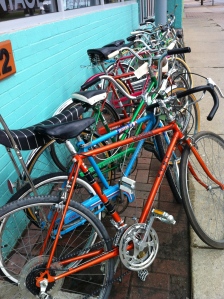 All I need now is an ironic t-shirt and some cutoffs!

On my last day there, I went to a nearby salon for a haircut, which – perhaps oddly – I often do on a whim, in places to which I may not return. The stylists, local with strong Midwestern accents that made me want to sit on someone’s old flowered couch and eat too much fruit pie, were incredibly friendly. They chatted with me the entire time, full of enough genuine interest that I’m fairly convinced I could walk into the same spot a year from now and pick up the conversation without preamble. I heard about their lives, and I told them about mine.

And I keep thinking about them, when I think about my time in Michigan, how they made me want to stay. I don’t pretend that I can add to the conversation about what has gone wrong in Detroit, and what needs to change; it’s a complicated place. But the city has its charm; there is something about its intangible, lonely independence that has gotten under my skin both times I’ve visited.

I think Detroit knows what it is and makes no apologies for that, even as it works to change. It has its quirks – Eminem, as a hometown hero, is in near-constant rotation on local radio, and the highway system of “Michigan Lefts” had me driving in circles when I first arrived – that somehow translate into a sense of acceptance for itself. That acceptance seems to filter down into its people, who are some of the most real I’ve ever come across in this country.

It’s as if Detroit knows it has nothing to lose by being itself. You might love it, or you might hate it, but however you feel, there’s no way to pretend that you are anywhere else. For what it’s worth, though I am in North Carolina now, I am already thinking about my next trip to the Motor City, and the people I might meet when I arrive, after a too-long drive once more, even if I am again on my way to somewhere else. 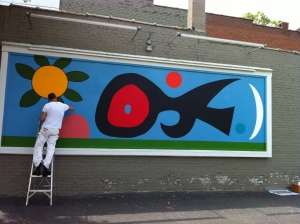 Proving that people can make a place beautiful.