Parenthetical thoughts about so little

I’m in the midst of consuming too much caffeine, after a short night when my sleep was interrupted by vivid dreams and words penned too early to likely count as morning pages. Now I’m sitting next to a woman with fantastic gold shoes and short curly hair, and am distracted by the thoughts of things to come.

(I just tried to surreptitiously take a picture of her shoes, forgetting that my last-legs phone now insists on making that annoying iPhone camera noise, even though it says it is silenced; flustered by the telltale click, I took two rapid-fire pictures of my own feet instead.

On a grander scale, I’m in the midst of planning the next few weeks, which will actually take me from California to the New York Island, from the redwood forests to the gulf stream waters (…and now I’m in the midst of singing that entire song, wondering why Woody Guthrie’s tune is not our national anthem instead of the Star Spangled Banner, which – lovely in its way – is so hard to sing).

(Really enjoying the over-use of parentheses today. Did I mention my lack of sleep?)

My life feels a little crazy right now, with all of the traveling I’m going to continue to do over the next couple of months, and with the decision to move across the country later this summer. (Remember that post from May 19? I took the job, largely in the spirit of saying yes.) My world is suddenly changing, almost too quickly for me, and I occasionally have to pause to catch my breath (i.e., lean over a counter, cry a bit, straighten up again, wipe the tears away, give myself a pep talk, and keep going).

Among other projects, I’m planning the actual drive across the country near the end of the summer. Though I have done the drive before, this is the first time I will do it alone, and that is – like so many things in life – both exciting and intimidating. (Note to self: learn to change a tire, for realz, instead of sitting on the sideline pretending to help as someone else does the hard work.)

For right now, “planning the actual drive” means “writing down on random slips of paper some places I’d like to go and sort of imagining that I’ll need to make a budget at some point.” I have not yet decided if I am going to drive straight across (approximately 2,877 miles, if you’re interested, and especially if you would like to calculate how much gas I’ll need) or if I am going to zig-zag my way through the parts of the country I’ve either never seen or previously adored. Knowing me, I’ll probably wiggle my way across the land a little bit, likely planning fairly poorly and staying in too many hotels (though I’ll boldly vow before leaving to only stay in my little tent or at friends’ houses, all in the name of the aforementioned imaginary budget).

What I do know, though, is that it’s probably going to be a summer that changes my life. Again: exciting and intimidating, along with many emotions that I won’t go into here (at least not in this post). I want to look ahead towards all the good things coming my way, instead of looking back at the many wonderful people, places, and things that I am going to miss, even though they’re coming with me, too.

(Side note: I’ll only be 6,746 miles from New Zealand, as opposed to the 8,762 miles that separate me now from all those kiwis. I am also looking forward to putting some distance between me and the woman to my left who is having a very loud phone conversation about her decades-old journalistic training.)

This life-changing time: on the east coast, summer means long days, lightning bugs, mosquitos, swimming pools, s’mores. I’m trying to ask myself, as I make these vague preparations, what else should I know about what it means to be an American summer?

If I promise to take pictures and share with you what I discover, I’m hoping you’ll offer up your wisdom. If you had the time, where would you go in the United States? What adventures tempt your imagination? Perhaps I’ll discover that they tempt mine as well.

And: I am also, it turns out, not to proud to take a picture of a stranger’s shoes, bravely defying the embarrassing click of a semi-broken iPhone camera. I’m sure that’s got to count for something, somewhere, regardless of caffeine ingested, hours slept, morning pages written, crazy dreams forgotten, breaths taken, and pep talks given. 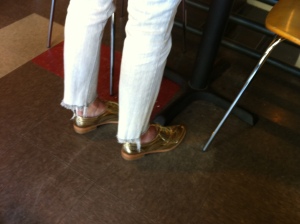 I quickly scurried away after taking this picture and accidentally bumped into the shoe-wearer herself.

If only I could cleverly turn these golden shoes into a metaphor for my life, racing forward without apology, but all that comes to mind is that endless skyway, that golden valley, those sparkling sands and those diamond deserts.

(As Mr. Guthrie so eloquently pointed out, this land was made for you and me.)