I’m not someone who usually remembers my dreams, but lately, I’ve had vivid dreams about Paris. I awaken with a sense of longing, for the dreams are real enough – full of people I met, experiences I had – to fool me into thinking that I’ll open my eyes and hear my French birds outside the window, announcing the start of a new day. It hasn’t happened, of course; the birds are far away, and right now, what I hear instead is the beep-beep-beep of a truck in reverse, American and cautionary.

I miss Paris. I had an opportunity to return for the fall months, and in choosing instead to move to California, I am forgoing that option. It is a wise choice, and yet I’m sorry to give it up. Already in the baby stages of planning out the places I hope to visit in the coming year, I’m wondering if there is a way to work in a stop in France, though Europe itself is not the immediate focus of my possible travels. If I go, it will be on the way to or from somewhere a bit farther out.

In any case, there’s so much that I haven’t shared about Paris that I thought I might use this post as a way to travel back a few weeks, even if I can’t do so physically, and highlight some parts of the City of Light that have reappeared in the form of my slumbering adventures (plus a few others). So here, even though I don’t engage in #tbt, is my version:

I didn’t say anything about the day that I went out to see Monet’s gardens, but it’s a place that really deserves its own post, so I offer my apologies for that oversight. I think it is the loveliest man-made place I’ve ever seen. Flowers bloomed almost obscenely, so prolific in their colors and size that it felt somewhat gluttonous to devour their beauty. I could not stop my stare, however, and felt fully alive while in the gardens, grateful for the gift of sight.

An illicit picture from inside the house; the kitchen is what I actually wanted to photograph – please look up pictures online.

A starburst made from veg!

It is no secret that Paris is known for its markets. People rave about them, with good reason, discussing at length where to buy the freshest fruit, fish, and flowers. The markets pop up in the early morning and are taken down hours later, creating entire, mobile worlds of commerce and conversation. At some markets, I’m convinced you could find anything: antique clocks, packages of brand new underwear, tubes of toothpaste, umbrellas, strawberries, cantaloupe, haricots verts, turbot, olives, basil, potatoes. Like so much of Paris, visiting the markets is overwhelming, gleeful, and sensuous.

Just imagine the food wealth that lady is pulling home. 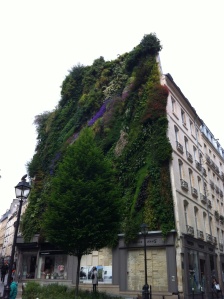 This wall is alive! Really!

I don’t have anything to add to this except that a friend and I stumbled upon this wall while talking a long, long walk through the city one afternoon. The fact that this is possible blows my mind, and I wish we turned all buildings into vertical, magical spaces. 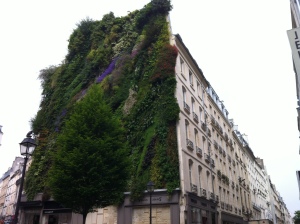 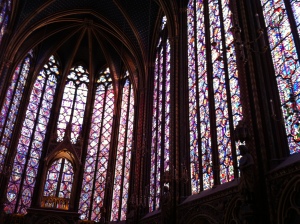 Beautiful and impressive, absolutely, but they didn’t really do it for me.

There’s actually a good reason why I haven’t talked much – if at all – about the churches and their stained glass windows. While magnificent, I realized how little meaning they hold for me, as someone who does not pledge faith to an organized religion. What I liked about them, though, is that they reiterated to me that I find my spiritual grounding outside, in nature. At the same time, I appreciate that these stained glass windows were the reminder of how strongly other people hold certain ideas.

Loved the candles at Chartres, though, and the idea of people lighting them for others.

A hall of wonders, among many halls of wonders, pointing out how smart and creative people can be.

This museum, housed in a former church, is the big exception to my feeling that I’d had my fill of religious houses of worship. It basically pays homage to Each Cool Thing That Humankind Has Ever Built, including everything from packing materials to anything having to do with particle physics to transportation, communication, sound, bridges, photography, weaving looms, and so much more. The museum as a whole presents the accomplishments of the brain as art, and is really, stunningly beautiful. Foucault’s original pendulum lived here until it broke in 2010; now there’s a replica swinging in its place. 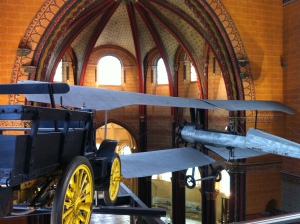 Cars on risers, airplanes suspended from ceilings: what a great use of churchy space!

If I haven’t mentioned the yogurt here, that’s a true oversight. I actually didn’t realize how much of a yogurt fiend I am until I got to Europe, which – I knew from previous visits – has some of the yummiest yogurt in the world. The obsession for the best that I could find started in Paris and spread to Scotland and Iceland. Back in the States, I am returning to the practice of making my own, and looking forward to perfecting that recipe. 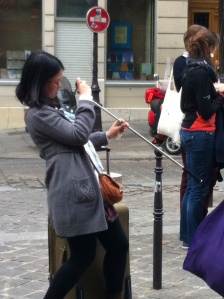 I tried so hard to get a good picture of this woman in action, and this picture does not at all capture what I saw. That long pole attached to her camera? That’s a selfie-helper. Basically, she used the pole as a go-go gadget arm in order to take a picture of herself from some distance. I couldn’t get close enough for a picture of that, but here she is, apparently too tired to remove the pole before taking a picture of something that wasn’t appealing as a selfie-background.

Consider this gratuitous food-porn; that’s what it is, obviously. Flake, flake, flake.

Actually, I know I talked about the pastries. I just wanted to include this picture of one of my morning croissants, because I miss them. In the U.S., good pastries are hard to come by, and this one was particularly delicious.

Ok, not a great picture; just trying to make a point.

“Liberté, Égalité, Fraternité” translates into “Liberty, Equality, Brotherhood.” As the French motto, it occasionally appears on buildings and statues, and I saw it scribbled onto more than a few homemade posters during various protests. A French friend explained that it means that French people feel a freedom to engage in life in ways that they alone deem appropriate – and that because of this idea of both liberty and equality, they get to each decide their own interpretation of laws and rules. He also explained that it is a source of constant tension, as both cannot fully exist simultaneously (which has given me something else to think about in my crowded mind). I like, though, that the ensuing culture is one that respects these individual preferences and ideas.

This guy interpreted his liberty and equality as the right to juggle in front of traffic, which he did for hours. 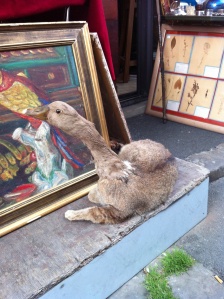 And to think that I didn’t even know that GeeseCats were native to France.

Recently, I wrote about how often I am enthralled with a foreign place because it’s just that much easier to be caught off guard when everything is in a different language. I loved this about Paris; I walked around the city with a constant anticipation for the unexpected, and it presented itself often, delighting me with the knowledge that I didn’t fully understand everything around me. This was not, of course, simply because I don’t speak French fluently; it’s also because I was open to seeing things in a different light, when I was on a different country’s soil. The challenge is to keep my eyes open with that same expectation and awe, even in my own land.

…although I’m trying. This sign had me giggling all night. Powder poom! Who knew that removing a simple line could make this sign hilarious? Tee hee.

I have in mind that there is one other post about Paris that I’d like to write; I’ve actually been working on it – off and on – for a few weeks. We’ll see if it comes out. If not, this might be the last I talk about Paris for a while, except to say this: every single time I’ve visited the city, I’ve become more deeply enamored of it. I wondered if I would feel that way after an extended stay, and I absolutely do. The city just makes me swoon – apparently even when I’m not even awake. 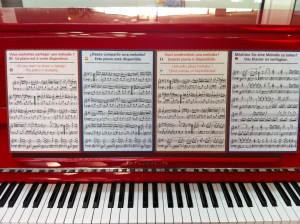 Any city that puts red pianos in the airport for people to play is all right by me.