I started the year 2014 in the freezing city of Toronto, discovering its charm despite the fact that the outdoor temperature hovered steadily around eight degrees. It’s been a year of travel to different places, and a year of discovery, both in those places and within myself. 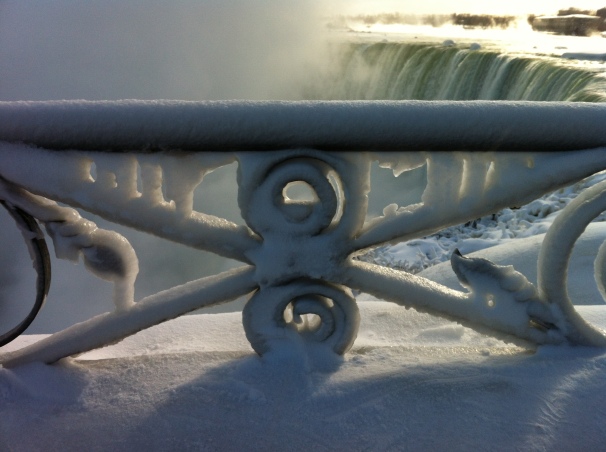 Niagara Falls was a frozen marvel on the way back from Toronto.

As the year starts drawing to a close, I’m conscious of both the significance of 2014, and its gifts. One way I’m looking back is to remember all of the places I’ve been, aware of the joy, mischief, and growth that they have each offered.

I start with New Orleans.

The Big Easy: it’s a city I’ve come to love dearly. My aunt, who first visited when she was on her honeymoon more than 50 years ago, has passed on a sense of adoration for the charm, food, and style of that town, which is so unlike any other. Most years, I meet her, my cousin, and my sister for a long December weekend of sublime meals, late-night conversation, and the occasional game of mah jongg, inevitably accompanied by a bag of dark chocolate M&Ms.

The trees from this display became part of a friend’s wedding décor a few weeks later.

This year, for many reasons, we are not taking our holiday trip, but fortunately, I had the chance to visit New Orleans with two girlfriends back in January. Not counting Toronto, it was the first trip I took in 2014, and thinking on it now, it really was a hell of a way to kick off the year.

I am keenly aware that there is nothing new that I can say about New Orleans; passion and intrigue have captured visitors’ hearts and imaginations – and sometimes, better sense – for far longer than I’ve known the city. But I can agree with so much of it. New Orleans is alive, vivid in its music, culture, food, and drink.

My sister suggested we try Peche for dinner. Clearly, it was a good suggestion!

In this town, I know I am a tourist, and I’m ok with that. It allows me to delight in the many celebrations of the senses that crowd into being, inviting me to abandon any concern or stress plaguing my everyday life.

The truth is that I’m not sure I could live all that happily in New Orleans for very long, though I think I could do it well for a year or two. If nothing else, it seems like the heat and humidity of the summer would leave me battered and drained. But at the same time, there’s a sense of possibility embedded in these trips, the idea that maybe New Orleans and I were meant to be.

There is a farmers’ market, after all, full of greens and bounty even in January.

In the end, I think there is a part of me that wishes I could originate from this town, that I had this bourboned blood coursing through my veins, that I had grown up on pralines and jazz and winters where snow falling on festive streetcars is reason to stop and stare.

Art, indeed, pulsates through the days and nights in this marvelous town.

In any case, I like to think it has become a part of me. And this winter, as the rain falls in Northern California, I am missing New Orleans: the sunshine, the music, the drinks, and the sweet, unbuttoned gentility of a city totally its own.