A week of giving thanks: July 16

This is a fun one.

In my blind scrolling this morning, I landed on a picture of Al’s Breakfast in Minneapolis. We were there for a wedding – of friends who have since had two sweet babies together – and my now-husband wanted to share with me one of his favorite college-day haunts. He used to go there in the mornings before classes, to indulge in a full breakfast, which is something I can’t imagine having done during college; I was lucky to grab a cereal bar on my way out the door.

But for my husband, who once told me that breakfast and skiing were his two favorite things, getting up early enough to have an actual meal made perfect sense. He would take a journal and write, and have coffee and pancakes, sausage, or some other hearty, cold-weather offering, before continuing on his Minnesota day.

So when I look at this picture, I think of my gratitude for a few things. First, I love thinking about the places I’ve eaten as I’ve wandered around this country and – to a lesser degree – this world. There’s something precious about stumbling into a neighborhood and sitting down at a restaurant with those who live there: it’s a type of immersion that I appreciate, and that speaks volumes about a place.

Second, even though they were nowhere to be found, I think of my family, who taught me to love food. My sister still helps me learn about the importance of eating well; where I am a novice, she is a self-taught professional, long steeped in the awareness of flavors, textures, and historical significance of food. Where my brother is a visual artist – a painter – my sister is a gustatorial creative, and I’m so very grateful that she continues to influence my own education around food.

Third, this picture was taken in a place that is close to my heart, even though I’ve not spent that much time there. Minnesota is beautiful, and I’ve had the good fortune to make friendships with some stunningly good people there. More than that, though, it is the setting for a series of books – the Betsy-Tacy series, by Maud Hart Lovelace – that helped me form an idea of who I wanted to be, and which still provide comfort and solace when I need to retreat from the world. Largely autobiographical, the books take place in the early part of the 20th century, and the character of Betsy – with her early feminism, love of family and friends, and long-held dream to write – provided me with an early and enduring model of some of the ways I want to move through the world.

And finally, of course, this picture reminds me of my gratitude for the man who introduced me to Al’s in the first place. We’d met two years before this picture was taken, and already by that point, I’d been surprised by the depths of his originality, which – even to this day – helps inspire me to embrace my own uniqueness. My husband is an enthusiastic, thoughtful lover of life. One of things that I appreciate most about him is his encouragement for me to do the things that intrigue me, that catch my heart and don’t let go. He is his own person, and wants me to be mine, too; even though breakfast-before-college classes is a small reminder of that, his desire for authenticity is an everyday fuel, and I adore that in him.

I don’t really remember what I ate at Al’s five years ago, but I do remember standing outside, waiting for the doors to open, and then sitting at the counter, happy to be there, happy to be exploring the world, happy to be in love, happy to be alive. And that is a fond memory, indeed. 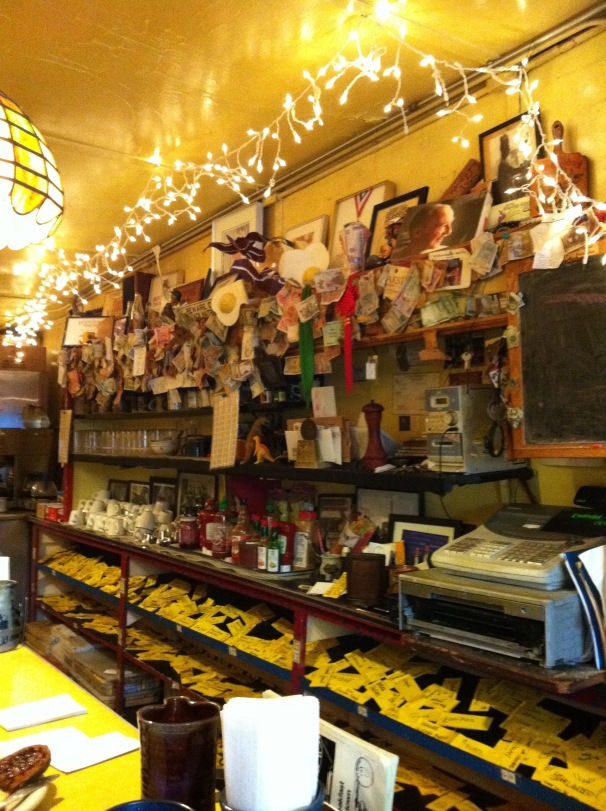